Art Medium She Could Use Whilst Recovering 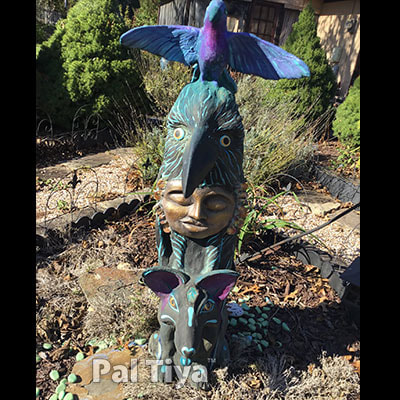 ​First off, who are we and why do we love art?
We're the crew from Pal Tiya International, and art, especially sculpting, is what we care about. Between us, we've sculpted for decades and used every sculpting material on the planet (no joke). We created Pal Tiya Premium, a versatile weather proof sculpting material that is non-firing, and gorgeous to use. We share these stories to help thousands of our artists around the world to make the coolest stuff. Thousands of creative people across the globe have fallen in love with the possibilities of our medium.

Brenda Chedd is a hobby artist from Maryland who is one of those creatives.
This is about her journey to finding an art medium she could use whilst recovering both her mind and body after a devastating event left her partially paralysed.

Something also occurred to her in the midst of her recovery, whilst she sat at home and in her garden. She says “I almost wasn’t here any more and I didn’t really have anything in the way of my art work as far as my sculpture to leave behind. I had a couple of paintings but nothing else. I thought “wow”, that would have bothered me.”

But let's back up and tell you the types of art that Brenda had tried in her creative journey up to this point.

​Not got time to read the full article? Listen to Brenda's interview on our podcast A Sculpted Life 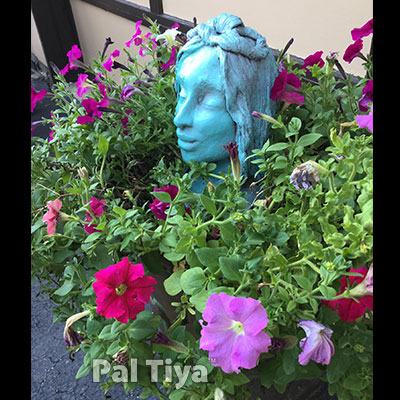 Different Types Of Art Along The Way

Creatively expressing herself was something that started very early on in Brenda's life. Her parents encouraged this spark in her and she and her good friend Ron Cole (himself a brilliant artist) used to explore art supply stores back in the day. She says Ron has always inspired her to keep creating.
Brenda has a deep fascination with all kinds of mythology and folklore from all different parts of the world and loves to bring those ideas out into the visual world. Brenda stared making her 2D art into 3D with sculpey and acrylic modelling paste. She enjoyed using sculpey and baking it at home but most of what she made and sold would inevitably break and, after that happened a few times, she was hesitant to keep using it. 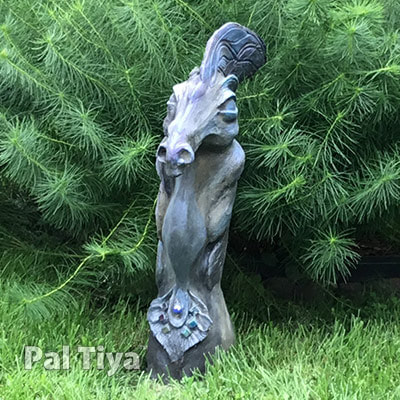 ”I was devastated and have to give people back their money,” she sighs. “I kept doing it anyway because I loved it but it was constant cycle of frustration.” She thought about making molds and casting it into something that wouldn’t break but says she honestly didn’t have that skill set. 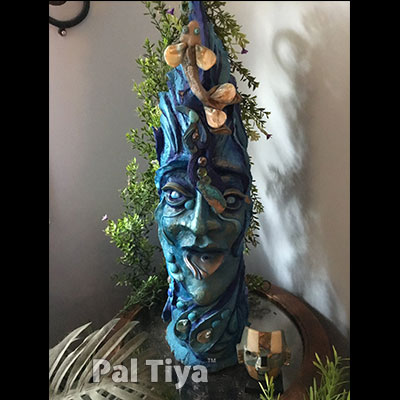 Eventually, because she loved experimenting she tried to find something else to use without the eventual heartbreak and twigged onto Porcelain clay about 5 years ago. Her supportive husband bought her a very small kiln, because a large one would have required them to rewire their house.
She loved porcelain clay but with a 14 hour investment time for each firing, and limited by the size, she again grew frustrated. Around this time she also played around with metal silver, bronze and copper clays, but again was limited size wise.
It was around this time that her health suffered due to the haemorrhage and when the doctors discharged her from the hospital her mission was to get working again as soon as possible. ​​ 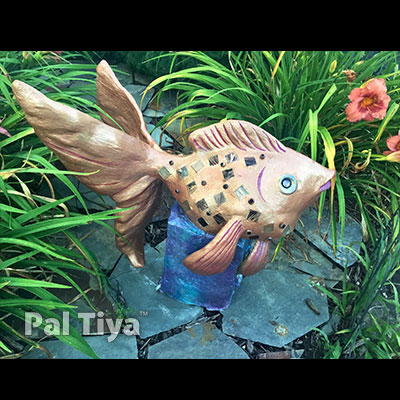 “On Sep 1st 2016 Brenda was at her day job as a legal assistant, nearly at the end of the day and all of a sudden she felt very strange.
"I was on the phone with a client and I lost consciousness. I woke up on the floor of my office with my poor husband and co-worker standing there and I am screaming, WHAT HAPPENED? I had no idea what had happened to me.” Her voice drops… “turns out I had had a subarachnoid haemorrhage, which is a ruptured aneurysm, in my brain.”
After this frightening and horrifying event, Brenda was devastated emotionally and physically. She spent two weeks in the Intensive Care Unit, partially paralysed as a result of two strokes. Her left arm sustained a great deal of problems as a result. ​ 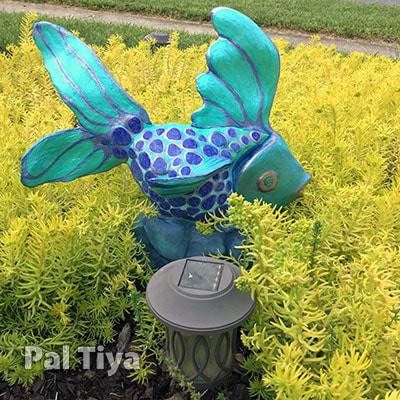 “While I was ill I couldn’t work in my studio, basically I couldn’t be unsupervised for a very long time. Someone always had to keep an eye on me, there was a seizure worry. I set up a temporary studio in my dining room so I was limited by space.”
She needed to know how to make sculptures at home easily.
Doctor’s couldn’t tell her how long her recovery would be so she literally took matters into her own hands and started manipulating clay simply to strengthen her left arm, which had been affected by the strokes.

“My fingers wouldn’t move independently, which was frustrating and painful. Every day I would sit and work the clay and make my fingers move the way I wanted them to. It was great rehab.” But here’s something amazing:
​“Something terrible like that can really have a lasting effect on you and you can make it really positive. I had a choice. I could curl up in a little ball and cry or if I want my left arm to work again and I want to feel myself again, then I have to get back to doing art as fast as possible.” 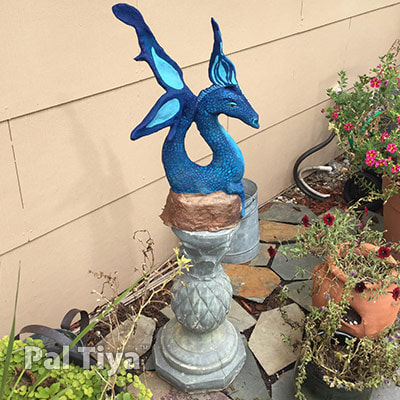 So she got on her own little quest. She wanted to make something again, she wanted to make something that had the ability to last, something that would still be here when she wasn’t.
“What can I get my hands on that I can make that happen with?" Brenda tried fiddling around with concrete and whilst she got a result it wasn’t the result she really wanted. She was again growing frustrated as regular concrete needs a major league support underneath or involves fibreglass. She tried with the chicken wire but her arms couldn’t deal with all of that. "It was a nightmare!"
New Art Medium- Solution with Pal Tiya Premium

And then lo and behold, one day she was online and saw a giant dragon being made. She laughs and says she thought, “wow… is that being made with tinfoil and concrete? I was very sceptical, how will this survive anything? I believe I said…good luck with that lady.” Luckily Brenda continued watching the build of the Pal Tiya Premium Dragon and knew she had to get her hands on the stuff! She says she fell in love with it before she even met it. 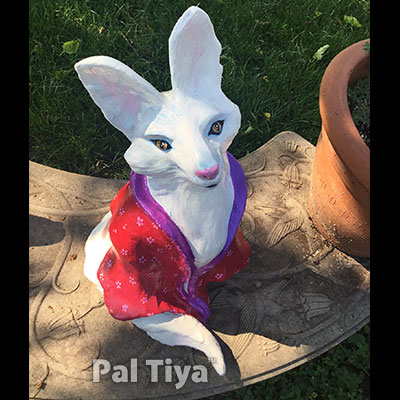 "It was one of those love at first sight things. When I found out about Pal Tiya Premium it was the best thing ever. Really it was because I did have criteria;​Then of course I bought some and the first night it was here, I had had a long day at work and I was exhausted but though, “I can’t go to bed until I open this bag, I have got to do this." Brenda really went for it and had such a ball with it. "I was being very experimental, this stuff feels great. I found it very similar to when I worked with powdered metal clay. The process of mixing Pal Tiya Premium was very similar so it felt familiar.”​ It was so much fun, she says and she was amazed by its strength. There was a lot of excitement about that! “It was everything it said it would be. It did everything it said on the tin!” ​
Dreams Coming True

Whenever we hear of artists like Brenda, we get literally all the feels. We are contacted by our customers all the time, who tell us how Pal Tiya Premium is allowing them to create art they’ve always dreamed of. We’re so inspired by Brenda’s story and her strength to continue in the face of such adversity.

“With all the other stuff I fiddled around with, this is doing precisely what I want it to do. It is consistently doing it. I am overjoyed and satisfied. The minute I put pieces outside (water dragon) in the garden. My neighbour next door was saying he was gonna steal them, asking when I was going sell them.
Art has been a huge part of my recovery!"